I had just completed a post celebrating Jamaica’s Independence when I read the news that Toni Morrison had died. My first instinct was to delete the light-hearted post. How could I be joyous when an icon like Morrison, Nobel prize and Pulitzer prize winning author, inspirational on so many levels, had departed this world? Her life’s example suggests that she would encourage us to celebrate her life rather than mourn her death.

Morrison inspires me as a writer with her metaphorical, original, and visionary use of language. I have no doubt that each word she leaves on the page is placed with careful consideration of its contribution to her meaning and the image it leaves in her readers minds.

Morrison inspires me to write truth. To write my stories without tailoring them to mollify the sensibilities of one group of readers or another. She was determined not to write literature that catered exclusively to a white audience, and if you have read Beloved or Tar Baby you will know that she held nothing back. She paved a way for the writers who choose to walk in and therefore enlarge the mark her footsteps have left.

Morrison inspires me to persevere. Although she was a storyteller as a child, she did not write her first novel until she was in her late 30’s, yet she completed almost a dozen substantive novels before passing away this year. Her work reminds us that once we are alive there are stories that we must tell. 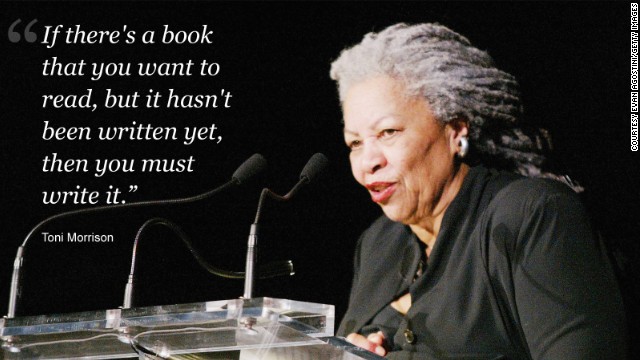 Although I did not read this quote from Morrision until after I wrote my first book, it epitomizes the motivation for my journey into being an author and publisher.

I purposely used the present tense here, she inspires me. Her passing from this world does not mean an end to her influence. Her legacy will linger for as long as we read and understand the importance of literature. CNN reports that Morrison once said: “We die. That may be the meaning of life. But we do language. That may be the measure of our lives.”

Filed under Caribbean Lit News This Week, On Writing

And then there were nine…

Caribbean Reads’ ninth book, Seascapes, is now available on Amazon just in time for the holidays. It has been hailed as a delightful collection of beautifully illustrated stories about friendship. Great for children 8 and under although my 12 year old loved it. Get your copy today!

Seascapes Proof is in my hands

Last night before I went to bed I checked (for the 100th time) on the status of the delivery of the proof of my latest book, Seascapes. Imagine my surprise when I noted the status as “delivered”. The notes read “Delivered to Customer Boy”. It took every bit of restraint in my body not to get him out of bed to ask him for the package. Luckily good sense prevailed and I decided to look for it myself. Sure enough, lying on the floor in front of the TV was the usual brown cardboard packing that has come to mean “Proof”. Thankfully the proof was error free, imperfect, but probably only in my eyes and so the book should be available on Amazon in a day or two. Yippee!

Chee Chee and I are so excited that we got the third book in Chee Chee’s Adventures finished and I cannot wait to start work on the fourth. Ann-Cathrine is loving this process as much as I am and her illustrations are more and more beautiful with every book.

CaribbeanReads now has 8 books available for the children on your gift list this holiday. Check out the full list here.