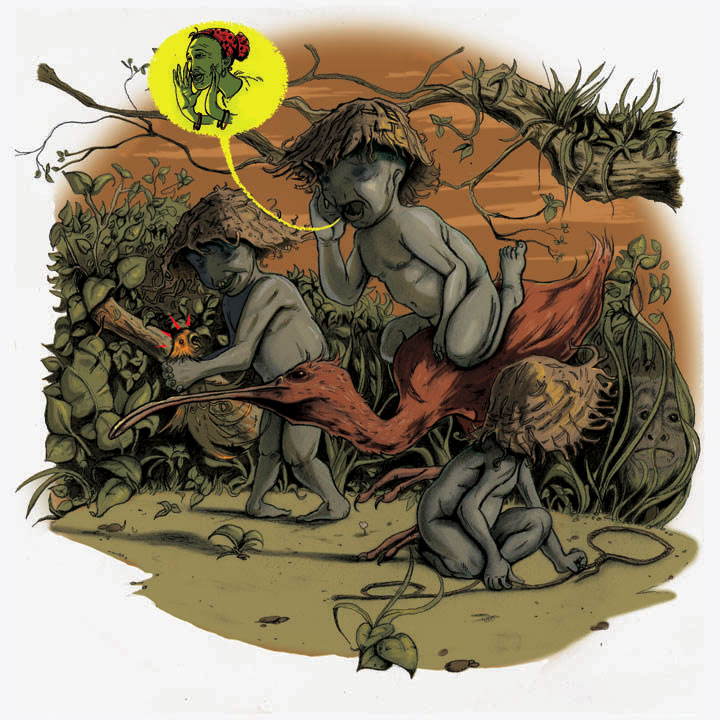 A douen (pronounced liked dwen-rhymes with Gwen) is a character of folklore best known for having feet that face backwards. They are also described as having no distinguishable facial features except for a mouth.
(Image by Daniel J. O’Brien, illustrator of The Talking Mango Tree and The Masquerade Dance, and author/illustrator of The Carnival Prince and The Midnight Robber.)
Douens are said to be children who died without having been baptized and so forced to roam the earth forever. They live in forests, are mischievous and playful, and invite live children to play with them. These children follow the douens into the forest and get lost. The douens’ backward-facing feet make it difficult to track them and the children they kidnap.

Another part of the lore about douens is that you should never shout a child’s name at night outdoors. If you do, a douen might hear the name and then call the child, thus luring them away.

The role of these stories is pretty clear. They are a warning to children not to stray far from home or to follow a stranger’s call. The fact that the tales are centered around forests, suggests that the stories originated in rural areas where dangerous predators lurked in the forests and it was important that children kept close to home. The stories also seem to be a warning to parents who may be hesitating about baptizing their children.

Douens have a bad reputation in folklore but find some redemption in the award-winning The Whisperer’s Warning by Danielle Y. C. McLean.