As a rule, CaribbeanReads uses Caribbean illustrators. We have a few non-Caribbean illustrators on our go-to list, for example, the first illustrator that I worked with was the phenomenal Ann-Cathrine Loo from the United Kingdom, and I would personally buy her a Caribbean passport to keep her on our list if it came down to that. But the exceptions are few and far between.

There are a few illustrators that we’ve used repeatedly and there is a good reason for that. These are illustrators who deliver excellent work that meets the requested specifications and is delivered in the time frame promised.

The main issue that we face with illustrators, however, is that many do not understand the difference between the art work that one does for sale at a gallery, for example, and the artwork that is placed in a children’s book, and no matter how talented an artist you may be, if you don’t understand this, the whole process of children’s book illustration can go south very quickly. This article discusses a few tips that will help the relationship between the illustrator and the commissioner. 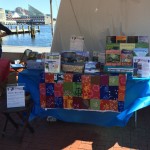 CaribbeanReads participated in the Baltimore Book Festival in October. It was on the beautiful Inner Harbor in Baltimore, a promenade that attracts a lot of people, so in addition to people who came to the festival, there were many others just wandering by. 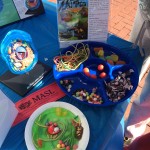 Build a Cell From Candy

Many of these people stopped to take a look at the CaribbeanReads booth. We had a display put on by Zapped! author, Jewel Daniel. We invited children to make a model of the cell using candy. This drew a big crowd, but most of the people who stopped just to ask questions about the books were people with Caribbean roots. One elderly couple drifted near the booth and as they moved away I overheard the woman say:

“Oh, those are books for people who want their children to go to the beach.”

“These are books for people who would like to expose their kids to Caribbean culture,” I retorted. Perhaps not the most professional approach, but my aim is to educate.

I wish that I could convince myself that her attitude was a minority one, but the evidence did not bear this out. People who took our cards and flyers were sure to promise to pass the information on to their Caribbean contacts. Why not to their American, European, African, and Asian friends? I really hope that our customers can break the mold, share Caribbean books with their non-Caribbean friends and bring a little Caribbean warmth into the lives of the rest of the world.

Seascapes Proof is in my hands

Last night before I went to bed I checked (for the 100th time) on the status of the delivery of the proof of my latest book, Seascapes. Imagine my surprise when I noted the status as “delivered”. The notes read “Delivered to Customer Boy”. It took every bit of restraint in my body not to get him out of bed to ask him for the package. Luckily good sense prevailed and I decided to look for it myself. Sure enough, lying on the floor in front of the TV was the usual brown cardboard packing that has come to mean “Proof”. Thankfully the proof was error free, imperfect, but probably only in my eyes and so the book should be available on Amazon in a day or two. Yippee!